Plant a tree in memory of Ellyann
An environmentally-friendly option 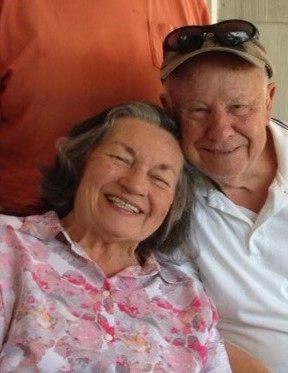 Ellyann Greene Eason, 89 of Columbus died peacefully on Sunday Morning March 21, 2021at home surrounded by her family. She was preceded in death by her parents Virgil Roy Greene and Leslie Mitchell Greene, and two brothers Robert Carrol Greene and Roy Mitchell Greene and a special aunt Stella Lou Mitchell.

She was born in Camp Hill, AL and moved to Phenix City with her family when she was three years old. Ellyann attended local schools and graduated from Central High School in 1949 and Alabama Polytechnic Institute (Auburn University) in 1953. On September 6, 1952 she married Walter Schley Eason Jr. and they were married for over 68 years.

They were the proud parents of four daughters-

She also dearly loved her many nieces and nephews.

Ellyann's early teaching career was in Maryland where she taught at Hartford County High School while Walter was in the Army stationed at Fort Detrick. After moving back to Columbus, she became an accredited Flower Show Judge, taught Sunday School for 25 years, and was on the Alter Guild at St. Paul United Methodist Church for 20 years. In the early-eighties, Ellyann and her four best friends Barbara Ann Mitchell, Jane Duncan, Polly Scrantom and Martha Tate formed The Wedding Belles. They worked together for several years creating spectacular weddings for many couples in the area. She was also a member and officer of several boards and clubs in the area. In her later years, she worked with her husband at their business Phenix Rental Center in Phenix City, AL

Ellyann loved nature and gardening and loved to share it with anyone she met. It was her way of sharing God's creation and His love for others. She also loved to travel and together with her family shared many wonderful "See America" trips in their camper. She and Walter were also able to travel to Hawaii and to many countries in Europe.

A special thanks to Mattie Ruth White (considered her 5th daughter) and her entire family. They were all a loving, integral part of our family for many decades.

Thank you to Calvin Harris, loyal employee, and incredible helper for many years and to our wonderful more recent caregiver Anita Jones for their love, friendship, support, and compassionate care.

The family would also like to thank the staff on the SNF unit at East Alabama Medical Center and Columbus Hospice for their incredible support and care.

Due to Covid-19 a memorial service will be held at a later date to celebrate Ellyann's life.

Plant a tree in memory of Ellyann by clicking here.
To send flowers to Ellyann's family, please visit our floral store.

Plant a tree in memory of Ellyann
An environmentally-friendly option

Plant a tree in memory of Ellyann

1 tree planted in memory of Ellyann

My prayers and deepest sympathy.  God bless you.

A Memorial Tree was planted for Ellyann Greene Eason

Plant a tree in memory of Ellyann